Vancouver, British Columbia, November 28, 2019 – Sego Resources Inc. is pleased to announce another drill target has been identified at Miner Mountain.  A re-evaluation of drill core from the Cuba Zone identifies a high-grade porphyry with local zones of 1-2 percent (%) copper and 0.5 grams per tonne (g/t) gold that has been pervasively overprinted by later grade- destructive alteration.  The porphyry is open beneath the level of current drilling and the destructive alteration is expected to be restricted to shallower levels based on similar alteration at alkalic porphyry deposits including New Afton (Tolman and Lipske, 2016) and Cadia East (Wilson, 2003).

This target was generated during a review of the property and its potential, undertaken by the company in conjunction with consultant Dr Alan Wilson, an expert in alkalic porphyry deposits who completed his PhD on the Cadia deposit in Australia and was recently the International Exploration Manager for Antofagasta Minerals.

“Recognising the high-grade porphyry at the Cuba Zone and understanding the reason for the loss of copper and gold mineralisation is a significant breakthrough.  Testing deeper beneath this overprint is a compelling target and proceeding to a drill program in the first months of 2020 is a priority for the company,”  commented Sego CEO J. Paul Stevenson.  “Adding a high-grade target at the Cuba Zone to the Empress, South Zone Gold-Copper and Sovereign geochemical and geophysical targets announced in mid-October only adds to the discovery potential at Miner Mountain.”

Previously reported grades that show the tenor of the mineralization include:

Intervals that retain some mineralization as windows within partially to pervasively overprinted include: 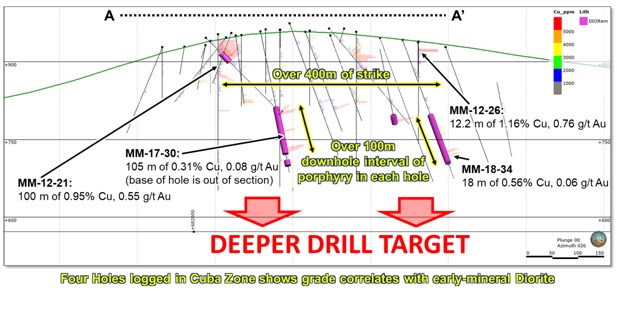 Figure 2:    Long section of drilling at the Cuba Zone.  Shallow percussion holes are removed for clarity.  Mapped diorite is shown from relogging of four holes and a systematic program of relogging is required across the zone prior to drilling. 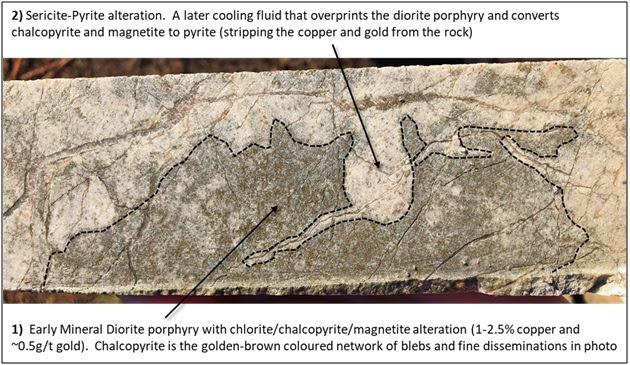 Figure 3:    The story in a photo.  A sample from 254.4 metres in hole DDH 18-34 showing the later alteration pervasively replacing the earlier copper and magnetite alteration which strips the grade.

This news release was reviewed and approved by Selina Tribe, Ph.D., P.Geo., a Qualified Person under NI 43-101.

Sego Raises $390,694.30 from Warrant and Agent Options Being Exercised

Sego Will Restart The Drill Program On June 15, 2021 To Expand Southern Gold Zone At The Miner Mountain Project, British Columbia

Sego Will Commence a Drill Program on April 14, 2021 at the Southern Gold Zone at the Miner Mountain Project, British Columbia